In what may well be a “first,” the Northeast HamXposition is proud to announce that it will host both New England and Hudson division conventions this year.  HamXposition will be held on August 26 – 28, 2022, in Marlborough, MA.

Proceeds from the convention will be directed to scholarships for both New England and Hudson Division students.  Volunteers and speakers will be drawn from both divisions.  Other details will be worked out as things progress.

“It certainly has been a while since the Hudson Division has had a convention” said Ria, N2RJ. “By joining forces with the New England Division for a joint convention, we can bring back a sense of nostalgia and community.”

“We are excited to have the Hudson Division join with New England to support and grow the 2022 HamXposition event.” said Fred, AB1OC. “It’s a great opportunity to expand HamXposition participation, programs, and work to provide support for the scholarships to young hams in both divisions.”

“Joining the two division events into one convention offers expanded opportunities for attendees, League members, and vendors alike” commented Mike, K1TWF.  “We anticipate larger attendance than we have seen in many years.”

The Northeast HamXposition, formerly known as “Boxboro,” features a Saturday morning keynote address, Friday and Saturday evening banquet dinners with special guest speakers, a large outdoor flea market along with an ample indoor commercial vendor space. The convention’s impressive three-day program of forums and speakers is one of the best in the country.

Upon locating the box, please announce on 146.565 that you have found it.  (Rob has been known to linger in the vicinity of a Fox Box.  Who is to say who might be nearby and watching you and the box at any given time?) 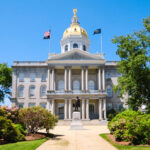 On Thursday February 17th the NH House voted 245 to 104 to send HB1644 to interim study. This effectively kills the bill for this legislative session. The bill would have required 5G telecommunication antenna to be placed at least 1,640 feet from residentially zoned areas, parks, playgrounds, hospitals, nursing homes, day care centers, and schools. In addition, an online registry would have been created to allow residents who are experiencing biological symptoms from wireless radiation exposure to list their relevant information.

Although the bill was aimed primarily at wireless 5G applications, enough ambiguity in the wording raised legitimate concerns of the unintended consequences to other non 5G radio services including amateur radio.

Interim study will take a serious look at the problems with the bill and NH Leadership will be ready to offer testimony to protect amateur radio interests if needed. Further information will be made available to our NH ARRL membership as it becomes available. Section would like to thank the many NH amateur operators who provided written testimony to their legislators against HB1644

The Boston Marathon Amateur Radio team is still in need of about 50 additional volunteers to fill our nearly 300 assignments.  The BAA volunteer registration deadline is this Friday, February 18 at 5:00 PM EST.  The BAA has told us that this is a firm deadline for this year.

If you are still undecided, we encourage you to register now; you can discuss any questions you may have with us and if you decide this is not for you this year you can withdraw between now and the end of March.

If you have not previously volunteered and want to chat about what we do, what is expected of us, and what equipment you might need, please do not hesitate to drop us an email.

Registration Links:BAA registration can be accessed via the BAA web site specifically in the “Athletes’ Village” section.

If you have any questions about the upcoming volunteer registration period, or the 2022 Marathon generally, please get in touch anytime. Volunteering at the Marathon is a big job and we appreciate the time and effort everyone puts into it. We’re happy to do what we can to make your work fun, comfortable, and effective.

We look forward to seeing everyone again soon.

Please make sure to whitelist volunteer@baa.org and contact@HamRadioBoston.org to make sure you receive BAA and ARO committee communications.

125 attendees responded to the post-Town Hall survey. Of those, 98 percent of the responders rated the Town Hall as “very or somewhat informative and useful” and 88 percent indicated that they would be interested in attending additional Town Hall meetings.

I learned yesterday that Fletcher Seagroves, N1MEO has passed and is now Silent Key. Fletcher served Amateur Radio in many ways including as the County Emergency Coordinator for Hillsborough County ARES and he was a past organizer of Hillsborough ARES Net. He made many contributions to EmComm activities in New England.

Fletcher was a 20 + years US Army vet. He was Sergeant First Class, and he has many family members in the Milford area. More about Fletcher’s life can be found in the  Nashua Telegraph here:  https://www.nashuatelegraph.com/obituaries-memorials/obituaries/2022/02/15/fletcher-w-seagroves-jr/.

Fletcher will be greatly missed. We will keep his family and friends in our thoughts during this difficult time. 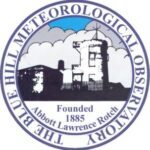 New England Sci-Tech and New England Amateur Radio [Natick, MA] are working with Blue Hill Observatory and Science Center to establish an educational amateur radio club. You can be a charter member!

The Blue Hill Meteorological Observatory has a long history of amateur radio going back to the turn of the last century. We are working to help BHO establish a new club that can meet occasionally on top of Blue Hill and more regularly in locations around greater Boston.

If you are interested in finding out more, please fill out the form below. Be patient as we  send out updates occasionally. The main building and weather tower are closed for renovations, so it will be a while before the radio club will have a permanent home. [Full story]

RASON [Radio Amateur Society of Norwich, CT] will be offering a General Class Amateur Radio License Course beginning Wednesday, March 16, 2022 and continuing through the end of May.  Class times will be held at 7:00 PM on Wednesday evenings via Zoom.  The course is free to the public, but you must register to take the course.  Registration will get access to the Zoom link as well as a link to my server, which will host all of the course materials.  Each lecture will be recorded and will be accessible after the class on that server.

You will need to purchase the ARRL General Class License Manual. which can be purchased directly from ARRL at http://www.arrl.org/shop/Licensing-and-Education/ or from Amazon.  Make sure that you get the 9th Edition, which is valid through June, 2023.
Your instructors will be: Mark Noe KE1IU, Chip Griffin N1MIE, Tony Girasoli W1TTL and Payton Noe KC1IVR.  We will take you through all the material that is part of the General class license syllabus, and you will be well prepared for the exam at the end of the course.  It is recommended that you have a Technician class license or that you have studied materials for the Technician exam prior to taking this course.  You must take and pass the Technician License Exam before you can take the General License Exam.  All messages regarding the course will be sent out at the RASON@groups.io website.  Please check out the RASON website https://rason.org for more information about our club.

Send an e-mail to KE1IUmark@gmail.com if you have any questions about the course or if you would like to register. 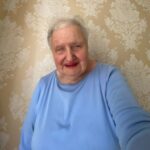 Former Connecticut Section Manager Betsey Doane, K1EIC, of Shelton, Connecticut, will be honored by the State of Connecticut for her work in accessibility and inclusion in higher education.

According to Barb Lombardi, K1EIR,  “My sister found out that an award will be named after her for her work with the State higher education services for accessibility and inclusion. It will be ‘The Betsey Doane Innovation for Accessibility and Inclusion Award’ given [annually] to a faculty member in a State college or community college who has given or contributed the most to access and inclusion.”

Doane, a retired mathematics and computer science professor, is also active in her local Rotary club as well as the Chamber of Commerce. 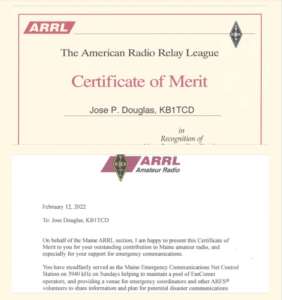 Jose Douglas, KB1TCD, Round Pond, Maine, has been awarded a Certificate of Merit by Maine Section Manager Phil Duggan, N1EP.

“On behalf of the Maine ARRL Section, I am happy to present this Certificate of Merit to you for your outstanding contribution to Maine amateur radio, especially your support for emergency communications.”

Douglas has “steadfastly served” as the net control station for the Maine Emergency Net on 3940 kHz on Sundays.