VERMONT NEW HAPMSHIRE (VTNH) CW Traffic Nets meets every night at 7pm local time on 80 meters 3.539. We normally operate at approximately 15 words per minute but will slow down to what ever speed you check in at. Don’t be bashful, we have all been there at one time or another.

As the snow season arrives, we’ll be taking a hiatus from our outdoor fox hunting events. To keep our expertise up, though, what is the interest in having one or more video conferences over the winter to show off equipment and techniques? I can host the conferences with a Webex account (very similar to Zoom).

Possible meeting agendas could include fox and fox-finding equipment demos, photos of memorable hunts, discussions of hunting techniques, and improvements or variations to our events.

Depending on interest, the first video conference could be held in December or January.

Please reply to the group to let us know if you’re interested. Tell us your preferred day(s) of the week, suggested agenda items, and when you want the first meeting (specific date not required; preferred month is fine). When I get the info I can send out some date choices.

Maine Section Manager Robert Gould, N1WJO has resigned for personal reasons. ARRL would like to thank Robert for his years of service and his dedication to amateur radio. He has been the Maine Section Manager since July 2020. Mike Walters, W8ZY, Field Services Manager has appointed Philip Duggan, N1EP, as Interim Section Manager to fill the remainder of the term effective December 1, 2021. Maine is scheduled to hold an election for a new Section Manager in April of 2022. 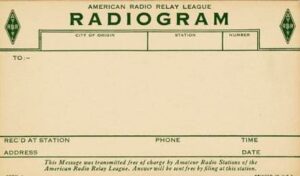 According to MA Section Traffic Manager Marcia Forde, KW1U, and RRI Board member James Geschwinder, N1PZP, the group will promote traffic handling activities and training across New England.  All are welcome to join.

The KD1D  RF Fox  is out for one last hunt before hibernation.

The KD1D Fox operates on 146.565 MHz FM with an output power of about 50 milliwatts and is currently located somewhere in Littleton.  It can be heard in the area  on Route 119 /2A between Route 110 (Littleton Common) and Route 27 (where the rail trail crosses).  If you’re not familiar with the area, check out the expandable map on

Clues:   A small three-leaved plant and one of the Disney chipmunks.

The trail may be a bit wet in spots.  Boots are advised.

Chris Thornton, W1TRK, writes on the WMAFoxHunters list:
Attention All Foxhunters!
The [Hampden County Radio Association] foxbox #2 has escaped its den and has gone into hiding AGAIN!
FB #2 is transmitting on 147.550 Mhz with a PL of 151.4. You can activate FB #2 by depressing the DTMF key #1. A short depress will activate it if you are close enough. FB2 is transmitting at 1 watt into a tall ducky antenna.
The location is in a publicly accessible area with some nearby parking and can be heard along RT.57 in Agawam/Feeding Hills.
This is a good opportunity for base stations to get in on the fun. If you can hear the fox please give its signal strength and direction if possible.  Please do not reveal its location, just a location where you can hear it from, this then becomes a starting point for the other fox hunters to use. It’s just as important for the hunters to know where it CANNOT be heard as well as where it CAN be heard!

The only contested seat for Section Manager (SM) in the Fall election cycle was in Kansas, where incumbent Ron Cowan, KB0DTI, of La Cygne, came out on top in the two-person race. Cowan outpolled challenger Lloyd Colston, of Arkansas City, 260 to 225. Ballots were counted on November 23 at ARRL Headquarters. Cowan has served as Kansas Section Manager since 2003. His new 2-year term will begin on January 1, 2022.

In Alabama, Roger Parsons, KK4UDU, of Mulga, will become the new Section Manager on January 1. Parsons was the only nominee for the position. He has been an Assistant Section Manager and a District Emergency Coordinator. Incumbent SM JVann Martin, W4JVM, who has served as the Alabama Section Manager since 2016, decided not to run for a new term.

In Michigan, Les Butler, W8MSP, of Gregory, will become the new Section Manager of Michigan when the new year arrives. He was the only nominee to submit a petition by the nomination deadline. Butler will succeed incumbent Michigan Section Manager Jim Kvochick, K8JK, whose job will take him out of the state early next year. Kvochick has been Michigan SM since 2018.

In Delaware, the Section Manager position remains open and a re-solicitation for nominees will be issued this winter for an 18-month term beginning on July 1, 2022. No nominating petitions were submitted before the deadline in September. Incumbent Section Manager Mark Stillman, KA3JUJ, is moving out of the Section early next year and could not run for another term after serving as Delaware SM since 2020.

I am building a statewide Elmer/Mentoring list so that hams or prospective hams can seek advice or assistance in order to get on the air or licensed. If you would like to represent your town, county, or district, please send an email to Phil Duggan, N1EP email n1ep@arrl.net – We need a strong Elmer Program to follow up with VE teams and clubs. If you are an experienced ham that would be comfortable with sharing your knowledge or could help put the person in contact with those that can help, then PLEASE become an Elmer!

Similar to last year, because of COVID-19 restrictions, ham operators will not have access to the NWS Gray facility, but we encourage you to take turns activating the WX1GYX call sign, either from your home stations, portable, or mobile, during the event.

If you’d like to use the WX1GYX call sign during SRD, please click here to sign up for a time/band slot. We hope to have at least one operator from each of the counties in the NWS Gray, Maine Weather Forecast area, so spread the word!

Participants are asked to log contacts in an electronic logging program, such as N1MM, and submit to kb1hnz@yahoo.com in an ADIF format.

During the periods that you’re not using the WX1GYX call sign, operators may also use their personal call signs to exchange their name, SRD number (which can be obtained here) and current weather conditions with other participating stations.

The event website provides complete operating guidelines, including the suggested exchange. SRD is a fun on-air activity that feels very much like a contest, but its informal. There’s no rules or band limitations. You can even use repeaters!