We are getting close to the Vermont 100, 30 hours of running and lots of radio activity. I am still looking for volunteers for aid stations and a few shuttle drivers. If you have helped in the past, we would welcome your help again. If you have new members in your club or group, please be sure to share this information with them. This is a great learning opportunity for all. If you can spare some time on July 16th or 17th, please let me know. This is a great event for a Great Cause!

Welcome to 2022 and Summer Activities are back and scheduled.

Please let me know if you are available to assist with our Public Service Events.

We start with the Covered Bridges ½ Marathon on June 5th a nice road course for runners starting at Suicide Six Ski Area in Pomfret continuing through Woodstock and Quechee Villages and finishing at the Polo field in Quechee VT. The Covered Bridges ½ Marathon is a benefit for local charities and youth groups in the area. July 15th is the start of the Vermont 100 a 100-mile trail course covering some of Vermont’s most beautiful trails and landscapes. We have been asked to assist with the Vermont Overland this year on August 27th, this is a 54-mile Bike event supporting the Reading/ West Windsor food shelf and Ascutney Outdoors. I am looking for someone to be the coordinator for the Vermont Overland. We finish the year on September 25th with Vermont 50 a 50-mile bike and trail run, both the Vermont 100 and 50 are Benefits for Vermont Adaptive Ski and Sport.

If you have helped in the past and are able to support the Amateur Community and these wonderful charities, please let me know.

If you would be kind enough to share this email with your groups and fiends that would be great. For all our events we get enjoy our hobby, provide a valuable service to our communities and we get to have some fun all at the same time.

New England Division Director Fred Kemmerer, AB1OC and Assistant Director Anita, AB1QB traveled 900 miles over the Field Day weekend to visit many clubs in New England. Here is a summary of their travels:

Our first stop on Friday was at Chopmist Hill in Scituate, RI to visit the Blackstone Valley Amateur Radio Club.  We had a nice chat with Mike, K1ETA, Lee, K1LRS, Byron, K1CYQ, Jim, K1GND, and Wayne, KA1VRF, who were starting to setup their Field Day Station.  We learned about the history of the Chopmist Hill site, which was used as a listening post during World War 2, due to its favorable conditions for radio reception.

Our next stop was at Glen Park in Portsmouth, RI to visit the Newport County Radio Club‘s Field Day site.   This was a great site and the hard-working Field Day crew had already put up 4 towers with antennas by the time we arrived at 1:30 pm.

We also enjoyed chatting with Nancy, KC1NEK, Paul, K1YBE, and Willy, W1LY about the Club’s field day plans and their activities and educational programs.

Our next stop was at the SECARS  (Southeastern Connecticut Amateur Radio Society) Field Day Site at the Zagray Farm Museum in Colchester, CT.  SECARS was formed only 1 month ago when the Radio Amateur Society of Norwich (RASON) and the Tri-City Amateur Radio Club voted to form a new club.  This year is the first Field Day for the new club.   We enjoyed talking to Rob, KB1RS, Bob, W1RPQ, and Peter, K1PTO about how the club was formed and their field day plans.

We made the Field Day journey in our mobile HF station.  We enjoyed operating the station during Field Day with AB1OC on the mic and AB1QB logging.

Our next stop was the Granite State Amateur Radio Association‘s Field Day site in Goffstown, NH.  Pictured above are Steve, N1EZ, and Steve, KC1OSX on the 40-meter station.

Our next stop was at the Concord Rod and Gun Club in Concord, NH, where the PART of Westford, MA club held their Field Day.  It was great to visit with our friends at PART!  Pictured above are Gene, KB4HAH, Fred, AB1OC, Geoff, W1GCF, and Rick, W1RAG in the Clubhouse.

We also spent some time at the GOTA station visiting with Andy, KB1OIQ.

Next stop was to visit the Nashua Area Radio Society, our home radio club, at the Hudson Memorial School in Hudson, NH.  It was great to visit with the members who came out for Field Day, including, Jamey, AC1DC, Lee, KC1GKJ, Vince, KD2TMJ, Joe, AC1LN, Mike, W1TKO, John, W2ID,  Fred, AB1OC, Aron, W1AKI, John, W1SMN, and Rick, KB1RGB.

Our first stop on Sunday was at the top of Stratham Hill in Stratham, NH – the Field Day site for the Port City Amateur Radio Club.   This club had a great antenna farm, taking advantage of the large tower at the top of the hill.  We also had the pleasure of meeting Brayden, KC1KUG, who is getting ready to be part of a youth team at WRTC next year in Italy.  We also got to chat with the other members at the site including, Derek, KB1LXX, David, W1DWF, Carl WA3UEN, Gerry, W1VE, Rory, W1ENR, Mark, K1RX, Steve, KC1ILT,  William, KB1YJ, Richard, N1AA, Dennis, KC1LLB, Joe, K1JEK, and Barry, KB1VX.

Our next stop was the Great Bay Radio Association‘s Field Day site at Garrison Hill Park in Dover, NH.  We were greeted by Les, KC1EOT, who had put together a great Public Information Table.

Our last stop was at Wassamki Springs Campground in Scarborough, Maine, the Field Day Site of the Wireless Society of Southern Maine.  This was a great site and club members were busy making the last contacts before the Field Day operations ended.  We enjoyed touring their site and meeting members Eric, N1RXR, Waylon, KC1HJN, Jason, W1SFS, Tim, KB1HNZ, Stefania, K1GJY, Peter, KC1HBM, and James, KB1SDK.

Over the weekend we drove a total of around 1000 miles – you can see our trip below.

We have been very much looking forward to visiting Field Day sites around New England this year. It was great to see everyone face-to-face and see the many ways that folks approach Field Day. We very much enjoyed talking with folks about their club and their Field Day experiences. 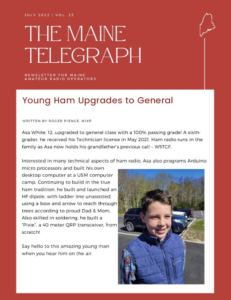 Volume 23 of the Maine Telegraph is available for viewing. 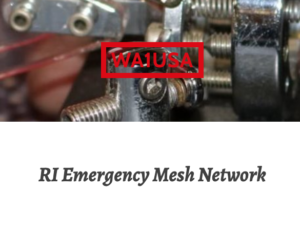 RICOMU, a Rhode Island ARRL Affiliated Club, was awarded an ARDC grant of $83,000 for upgrades and expansion of the Rhode Island Emergency Mesh network, according to RICOMU President Gil Woodside, WA1LAD.

The project will include additional Yaesu Fusion repeaters linked through the RIEMN , new and upgraded mesh nodes, cameras and all the other accessories and equipment needed for the project to succeed.

Marcia Forde, KW1U, writes on the New England Traffic Handlers Facebook page:
Hey New England Traffic Handlers:
I’ve not been much of a poster on FB but there are exciting things happening in the traffic handling world and at ARRL.
Did you notice in July QST the comments from ARRL CEO David Minster, NA2AA? He acknowledged the ARRL had not taken the lead it should in emergency communications in the last decade. However, now with the creation of a new standing committee, Emergency Communications and Field Services Committee (EC&FSC), there is, I believe, a renewed interest in turning this around. A subgroup of that committee has been working for the past few months on identifying what in NTS needs updating and how NTS can, in the future, be a real asset to public service agencies in their emergency communications. This group has been spearheaded by our New England Director Fred Kemmerer, AB1OC, in conjunction with W2RU, KW1U KC1OIP and KE5MHV (Emergency Communications Manager at ARRL).
We believe we have some great ideas and a vision for NTS 2.0 which has received positive response from the EC&FSC members, and we want to start sharing this with the traffic handlers community. We will be looking for input but perhaps more importantly for help on one or more of several implementation teams. Contact any one of us if you are interested in learning more and potentially helping out and we will arrange for Zoom meetings to share and explain the work that has been done so far.
I think this is a great opportunity to help make a difference in promoting the value of Amateur Radio to the public and to those agencies that serve the public in times of emergencies.
73, Marcia KW1U 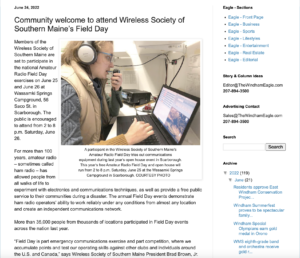 “Members of the Wireless Society of Southern Maine are set to participate in the national Amateur Radio Field Day exercises on June 25 and June 26 at Wassamki Springs Campground, 56 Saco St. in Scarborough. The public is encouraged to attend from 2 to 8 p.m. Saturday, June 26.”

The Class B station features a talk/oldies radio format. It covers the Merrimack Valley with 5,000 watts of power.

Listeners outside of the area can tune in to the program on the web at <http://webcastsusa.com/wcap/player.html>.

This link seems to work:  <https://streampros.net/980wcap>

An audio recording of the program is also available 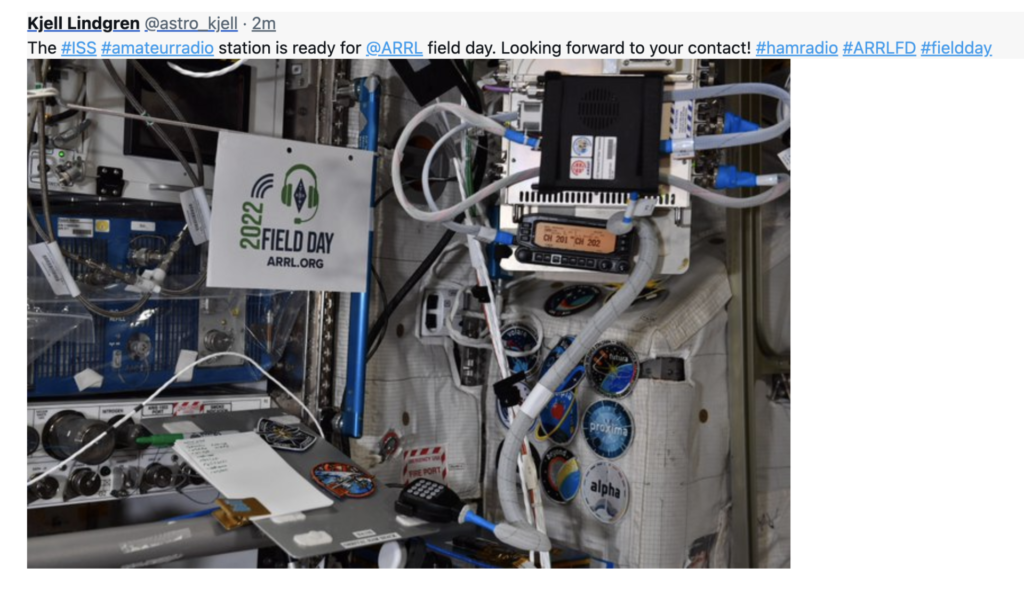 A reminder that 100 bonus points is available for sending a radiogram to the Section Manager or Section Emergency Coordinator during the Field Day event. Listed below outlines the information required in the radiogram and can be sent via the Granite State Phone Net at 9p on the 146.94 W1ALE repeater. Also, a 3 hour window will be open Saturday evening June 25th, on the NH ARES HF frequency, 3976 kHz. K1UAF the NH STM will be monitoring for traffic between 7 and 10p.

7.3.5. Message Origination to Section Manager: 100 bonus points for origination of a formal message to the ARRL Section Manager or Section Emergency Coordinator by your group from its site. You should include the club name, number of participants, Field Day location, and number of ARES operators involved with your station. The message must be transmitted during the Field Day period and a copy of it must be included in your submission in standard ARRL radiogram or no credit will be given. The message must leave or enter the Field Day operation via amateur radio RF.

The Section Manager message is separate from the messages handled in Rule 7.3.6. and may not be claimed for bonus points under that rule. Available to all Classes.

7.3.6. Message Handling: 10 points for each formal message originated, relayed or received and delivered during the Field Day period, up to a maximum of 100 points (ten messages). Copies of each message must be included with the Field Day report. The message to the ARRL SM or SEC under Rule 7.3.5. does not count towards the total of 10 for this bonus. All messages claimed for bonus points must leave or enter the Field Day operation via amateur radio RF. Available to all Classes.