07/24/2020 – Due to travel and gathering restrictions in place because of the coronavirus pandemic, the ARRL Board of Directors met on Friday, July 17, 2020 in a remote session, using the Zoom videoconferencing platform.

During this session, the Board took the following actions:

A full list of recipients nationwide can be found at <http://www.arrl.org/news/arrl-foundation-announces-2020-scholarship-awards>.

Numerous lighthouses and lightships will be activated for the upcoming International Lighthouse Lightship Weekend, August 22-23, 2020. Among the 33 or so registered in the United States, five are situated in New England:

According to NARA’s Jerry Horton, W2JH: “We kicked off planning last Sunday during our weekly outreach video conference.  We will operate at least two HF rigs on Saturday [August 22, 2020] from about 10 AM to 4 PM,  with Sunday serving as the rain date.  We are exploring the possibility of streaming our station; at a minimum we want to capture plenty of video and lots of photos for after-the-fact posting.  The whole gang is involved, sharing assorted tasks: readying equipment, obtaining access to the lighthouse, site prep, publicity, handouts, etc.  Should be fun!”

Registrations for this year’s popular International Lighthouse Lightship Weekend (ILLW) appear to have been largely unaffected by the current COVID-19 pandemic. The event will take place this year over the August 22 – 23 weekend. By mid-July, more than 200 entries had been received, and some 400 are expected to have signed up by the event weekend.

New to this year’s event is Corsica at Phare d’Alistro, which for ILLW purposes carries the French number of FR0030. Two lighthouses in Ghana will be on the air for the first time, as well as Buck Island Lighthouse in the US Virgin Islands (VI0001). Germany is well in the lead with 54 entries, followed by Australia with 29 entries, and the US with 27 entries.

This event is designed as a fun weekend to encourage exposure to amateur radio and lighthouses to the visiting public, and ILLW stresses contacts should be more than just an exchange of signal reports. All participants are urged to observe local COVID-19 safety guidelines. —Thanks to Kevin Mulcahey, VK2CE 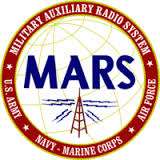 As part of a Nationwide HF Skills Exercise for MARS Members and Amateur Radio Operators the Chief of ARMY MARS and the Chief of Air force MARS have announced an exercise for July 20-24, 2020.

Amateur Radio stations will be asked for real life Infrastructure failure issues, and possibly other information to be relayed to MARS stations on that channel. Reports of no issues are just as important as reports of any issues. Be prepared to provide information to help the MARS station determine your FIPS code. Your Zip code is the easiest way to communicate that.

Please join us, and have some fun!

See the ARRL Website story on this for more details:
http://www.arrl.org/news/mars-announces-hf-skills-exercise 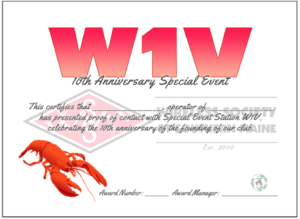 The Wireless Society of Southern Maine will hold a special events operation as W1V, commemorating its 10th anniversary.

On Tuesday, June 15, Alden Sumner Jones IV, KC1JWR, was hiking on the southern part of the Appalachian trail in Vermont (it’s also been reported as being on the Long Trail) with his cousins at around 12:30 PM. Alden started feeling light headed, his pulse was racing and the next thing he remembers is waking up with an EMT named Dave, from AMR out of Springfield, MA, who was hiking and saw Alden go down. Alden had suffered seizures. It was later determined that this was caused by low blood sugar. Dave attempted to call 911 on his cell phone. He could connect, but the 911 operator couldn’t understand him. At this point, Alden pulled out his HT ham radio, a BaoFeng.

He made contact through the K1FFK repeater. This repeater is located on Mt. Greylock on 146.91. The repeater is owned and maintained by the Northern Berkshire Amateur Radio Club. The initial call went out just before the Cycle 1 of the Western Massachusetts Traffic Net. Ron Wonderlick, AG1W, took the call. Alden initially asked if the 911 call went through. Ron began an eight hour process of acting as a relay between Alden, the emergency crews and various others.  [Full story]

The Algonquin Amateur Radio Club‘s June 11th virtual meeting will be hosted at a special time of 6:30 PM to allow the club to hear from the ARRL New England Division Director Fred Hopengarten, K1VR.  Information on joining the meeting will be provided via email prior to the meeting.

In Indiana, incumbent SM Jimmy Merry, KC9RPX, was re-elected with 515 votes to 384 for his challenger Brian Jenks, W9BGJ, of Fort Wayne. Merry, of Ellettsville, has been Section Manager since July 2018.

In Oregon, David Kidd, KA7OZO, was re-elected over challenger Kevin Fox, KU0L, of Damascus, 728 votes to 386 votes. Kidd, of Oregon City, has been Section Manager since 2018.

Bill Ashby, AA6FC, of San Jose, California, was the only nominee for the Santa Clara Valley Section Manager position. He will succeed Brandon Bianchi, NI6C, who decided not to run for a new term after serving since 2012.