The annual Simulated Emergency Test (SET) is on the first Saturday in November in NH. It’s intended to be our annual full-scale exercise of plans and systems across the entire Section/state. We begin at 8 AM and usually wind up between 1 and 2 PM. This year’s SET is based on a big hurricane, since it’s the most likely large-scale disaster we’re likely to experience in NH. It will be a simplex/HF only exercise. Repeaters won’t be used. We also encourage field station setups – even from your own backyard. One assumption is that any storm bad enough to require ARES support will probably take down our regular antennas, so it’s going to be an ad hoc operation.

One critical item I neglected to mention – every message MUST contain the words “this is an exercise”, and that phrase should also accompany any transmission that could be mistaken as real by a casual listener, as well as periodically during operations.

Simplex operation presents some interesting and fun challenges in our rather lumpy state. The goal is to send Situation Reports (SITREPS) to the State Emergency Operations Center liaison station in Concord, and handle any return message traffic. Clearly, we don’t have good simplex paths to Concord, so we use hilltop relay stations. The Concord liaison will likely be on Woods Hill in Bow. We’ve identified 2000’ Bly Hill in Newbury, NH that can reach Concord pretty easily. It’s accessed from Rt 103A. There is a turn-around at the summit I’ve used in the past for a discrete mobile relay station.

The first order of business will be determining who can hear whom so that relays can be organized. Then we can start generating SITREPS (in the form of weather/damage reports – a suggested form will be forthcoming) and passing them along to Concord. It’s likely to be chaotic, but that’s the nature of ad hoc operations and disasters. Work-arounds will be essential.

We can use both digital and manual (voice) methods to send the forms. Digital is preferred for accuracy and speed, and we use the very popular NBEMS suite of software, the core of which is Fldigi, a versatile sound-card digital modes app that’s also good for day to day use. The other key app in the suite is Flmsg, the message forms utility. There is a good tutorial on the NE ARES Academy channel, and some good (but need updating) beginner’s guides on the NH-ARES website.

We also use a system called Winlink, with a sound-card app called Winlink Express, which allows for email access through servers around the world. Its primary value is for sending and receiving internet email messages, but it can be used for ham-to-ham email via the same servers, and peer-to-peer connections between stations. Winlink email server access is only available via HF from our area. The most difficult bit of getting set up for Winlink is getting your computer to control your radio, but after that it’s pretty easy. Computer control isn’t essential, but it’s far faster. This is too big a topic for this email, so watch the video.

Manual voice messages using the RadioGram and radio version of the FEMA ICS-213 General Message Form require specific knowledge. Luckily, there is also a good video on this on the NE ARES Academy channel.

Under this agreement NEDECN provides space on its towers, where feasible, for MVARA microwave mesh network equipment.

MVARA has operated a microwave network in Manchester (NH) for 3 years.
It connects Elliot Hospital, Catholic Medical Center, Manchester EOC and
Manchester Radio Group. As an IP-based network, it can carry most services
the internet provides.

An MVARA 5GHz link between Crotched Mt and Mt Uncanoonuc is now passing DMR traffic from the Crotched Mt repeater to the Mt Uncanoonuc repeater site. Traffic is then routed to the internet via an NEDECN 5GHz link between Mt Uncanoonuc and Bow, NH that has been in place since 2016.
First suggested by Steve Berry, N1EZ, following a New England Division Town Hall, this cooperation between NEDECN and ARES Mesh systems offers digital repeater operators backup internet linking and the capability for remote monitoring of the sites and ARES Mesh networks with high sites for further expansion.
This achievment represents a significant accomplishment towards the goal of creating a New England-wide emergency communications system that includes  commercial system-independent linking.

The Western Massachusetts Train and Test group will be conducting a Technician license course starting October 18. This course will run on Tuesdays and Thursdays from 7PM to 9 PM for 6 weeks via Zoom. The course is free and you will need to purchase the ARRL technician’s manual which is available at the ARRL.org website or on Amazon.

If you are interested in joining the course, please email Ken, WB8PKK, at backhoeken@yahoo.com. See also the course registration link: https://forms.gle/z3f4So956H3gpNBGA. 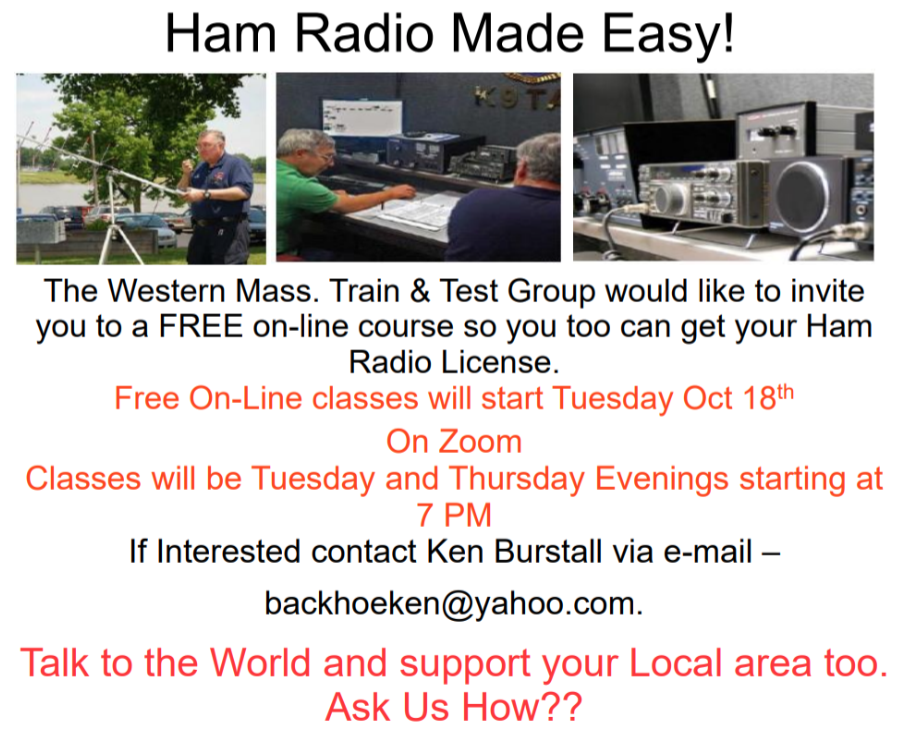 Oct 3, 2022 — The Amateur Radio on the International Space Station (ARISS) Program is seeking formal and informal education institutions and organizations, individually or working together, to host an Amateur Radio contact with a crew member onboard the ISS.  ARISS anticipates that the contact would be held between July 1, 2023 and December 31, 2023. Crew scheduling and ISS orbits would determine the exact radio contact dates. To maximize these radio contact opportunities, ARISS is looking for organizations that will draw large numbers of participants and integrate the contact into a well-developed education plan.

Proposal information and more details such as expectations, proposal guidelines, and the proposal form can be found at https://ariss-usa.org/hosting-an-ariss-contact-in-the-usa/. An ARISS Introductory Webinar session will be held on October 13, 2022, at 8:00 PM ET.  The Eventbrite link to sign up for the webinar is: https://ariss-proposal-webinar-fall-2022.eventbrite.com.

Crew members aboard the International Space Station will participate in scheduled Amateur Radio contacts. These radio contacts are approximately 10 minutes in length and allow students to interact with the astronauts through a question-and-answer session.

An ARISS contact is a voice-only communication opportunity via Amateur Radio between astronauts and cosmonauts aboard the space station and classrooms and communities. ARISS contacts afford education audiences the opportunity to learn firsthand from astronauts what it is like to live and work in space and to learn about space research conducted on the ISS. Students also will have an opportunity to learn about things such as satellite radio communication, wireless technology, and radio science. Because of the nature of human spaceflight and the complexity of scheduling activities aboard the ISS, organizations must demonstrate flexibility to accommodate changes in dates and times of the radio contact.

Please direct any questions to ariss.us.education@gmail.com.

Amateur Radio on the International Space Station (ARISS) is a cooperative venture of international amateur radio societies and the space agencies that support the International Space Station (ISS). In the United States, sponsors are the Radio Amateur Satellite Corporation (AMSAT), the American Radio Relay League (ARRL), the ISS National Lab-Space Station Explorers, Amateur Radio Digital Communications (ARDC) and NASA’s Space communications and Navigation program. The primary goal of ARISS is to promote exploration of science, technology, engineering, the arts, and mathematics topics. ARISS does this by organizing scheduled contacts via amateur radio between crew members aboard the ISS and students. Before and during these radio contacts, students, educators, parents, and communities take part in hands-on learning activities tied to space, space technologies, and amateur radio. For more information, see www.ariss.org.

Dave Tipping, NZ1J, writes on the ctfoxhunter list on October 1, 2022:

Phil Temples K9HI, our Assistant Directors, and I will hold our next New England Division Town Hall Meeting on Wednesday, October 19th, at 7 pm EST. The purpose of the meeting will be to provide you with an ARRL update, get your thoughts on what we should be focusing on, and answer any questions you might have about the ARRL and what we are doing on behalf of ARRL members here in New England.

We plan to spend a good deal of our time together answering your questions. If you’d like to send us a question in advance, you can do so via an email to ab1oc@arrl.org, or you can just plan to ask your questions during the Town Hall Meeting.

We hope to see you on October 19th! 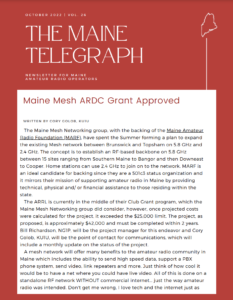 The October 2022 edition the Maine Telegraph, Volume 26 is available for viewing.