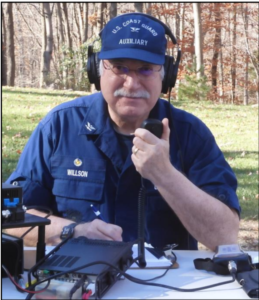 On the weekend of November 7-8, 2020, the US Coast Guard Auxiliary ran eight special event stations across the country to commemorate its 81st Anniversary. Created by the U.S. Congress on June 23, 1939, the “US Coast Guard Reserve Act of 1939” established a civilian volunteer component of the Coast Guard to promote boating safety and to facilitate the operations of the Coast Guard. Members had to be US citizens who were boat owners or had partial ownership of a boat.

Back in August a call went out to Amateur Radio operators in the Auxiliary asking them if they would participate in commemorating the anniversary by setting up and operating a Special Event Station. Since N1A was already assigned by the FCC, I chose N1R (“R” for Reserve, our 1939 name) and set up a “patio portable” station. I still don’t have a permanent antenna at my home. 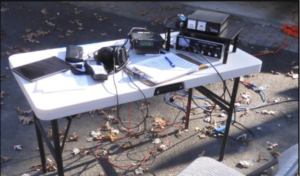 So, with great anticipation of having a pile-up with dozens of stations answering my “CQ” call to get the special event QSL card, I got on the 20- meter frequency I had published on ARRL’s Special Event page and started calling “CQ”. And then… nothing. Antenna tuned to 1:1.03, 80 watts SSB, Saturday morning, dead silence. Moved to the 40 meter frequency that I had published… nothing again. Frustrated, I listened up and down the two bands and heard a few stations, not the usual chatter. Even the POTA stations seemed to be staying home. Time to change strategy. I started calling stations that were finishing their QSO’s and that helped get a few contacts in the log.

Was it a post-election distraction? Were the bands just shut down? Not sure. After the event I called Chuck, K1DFS, in Plainville, CT who was operating N1A for the event from his home station, and he had the similar experience over the two days.

But was it fun? Absolutely Yes! Since I run the same setup almost every weekend with really good results (considering the station and antenna) I’m pretty sure that there wasn’t much more I could have done. This was my first activation of a special event station, so the learning experience was worth it all… how to get a special event call sign from the FCC, set it up in QRZ.com, list it on the ARRL Special Event webpage, and even more importantly, anticipate next year’s event! 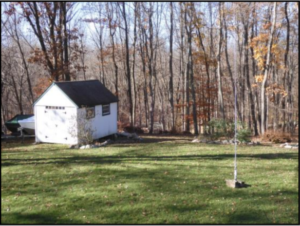 My station consisted of a Yaesu FT-891 running 80 watts with LMR400 UF cable to a 23 foot Diamond BB7V vertical antenna. An older MFJ 949D tuner and a RigExpert AA230 antenna connected to the tuner with a 2-way antenna switch. The most important component was a patient and understanding XYL.

For more information about the US Coast Guard Auxiliary and its history, visit the N1R page I posted on QRZ.com.