The ARRL Vermont State Convention, known at HAM-CON is Saturday, February 25, 2023 at the Hampton Inn Convention Center in Colchester, Vermont.

HAM-CON will feature eight forums running all morning between 9 AM-1 PM. Details are in the Forums section.

The Vendor Room will run from 8:00 AM until 1:00 PM. Vendors must arrive no later than 7:30 AM to avoid crowds during setup. There are scores of tables chock filled with goodies. The offerings range from new to boat anchors and we can never know what jewels will show up.

Please go to our Web Site, http://www.ham-con.org for other prices, travel details and program information.

Wednesday January 18, 2023 marks the 120th anniversary of Marconi’s first transatlantic message from the USA to the UK. KM1CC will be on the air to commemorate this achievement.

“We plan to operate HF 20 M, 40 M, and other bands as conditions allow. Check dxsummit.fi for frequencies.”

The Marconi Cape Cod Radio Club is a special event club.  The club has several on the air events a year to keep the accomplishments and story of Marconi and his South Wellfleet Wireless Station alive.  This station is listed as a National Landmark on the National Register of Historic Places (1975) and is now part of Cape Cod National Seashore, a unit of the National Park Service.   When possible, KM1CC sets up a temporary radio station inside the park.

Ham Radio University will also have a Contesting forum, –hosted by Yours Truly, KS2G– along with 15 other presentations on subjects ranging from Station Grounding, to Cables & Connectors, to Raspberry Pi Apps for Ham Radio.

They’re all free-of-charge … but advance registration is required.

I am pleased to announce that Bud Kozloff, W1NSK, is appointed to fill the role of Section Manager in Connecticut. Bud is currently the president of Candlewood Amateur Radio Association in Danbury and lives in Redding CT. Bud is also a member of the Yankee Clipper Contest Club and likes to operate CW.

I would also like to thank Betsey Doane, K1EIC, for filling in as Section Manager while the search continued. Betsey is of course well known in Connecticut and graciously agreed to help when needed.

Bud comes to this appointment with many years in the business world and the ham radio world.

In kicking off the ARRL Year of the Volunteers, this is a strong message that any ham can be a part of the ARRL and there is always something that a volunteer can do. Let’s all give Bud the support and assistance that a good Section Manager needs.

[As we prepare to ring in the New Year, I wanted to share this insightful essay generated by an artificial intelligence program known as “ChatBOT.” Pete Chamalian, W1RM, asked it about the future of  ham radio. -K9HI]

“Ham radio, also known as amateur radio, is a hobby that involves the use of radio frequency spectrum for the purpose of non-commercial exchange of messages, wireless experimentation, self-training, and emergency communication. It has a long history dating back to the early 20th century, and it has remained popular among a dedicated group of enthusiasts around the world.

“Additionally, the advancement of technology has made it easier and more affordable for individuals to get involved in ham radio, with the availability of small, portable transceivers and a wide range of online resources for learning and training. This may help to attract new enthusiasts and keep the hobby alive and thriving in the future.

“Overall, while it is difficult to predict the exact future of ham radio, it is likely that it will continue to be a popular hobby for those interested in communication and technology, and it will remain an important resource for emergency communication.” 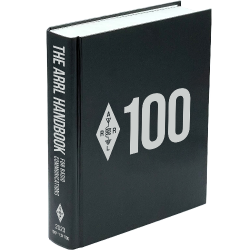 “…Under our Christmas tree, from my XYL, was the hot-off-the-press 100th Edition ARRL Handbook.  After our family and friends had all gone home, I sat at my desk and cracked it open.

“There on the title page, under the impressive words, One-Hundredth Edition, is the list of Contributors.  Among them are two PRA Members:  Frank Donovan, W3LPL and Rick Rosen, K1DS.  What an honor to have these two giants in their fields as members of our club!

“I next turned to the middle of the Handbook, to the full-color 100 edition retrospective, and there is a 2-page interview with friend and former PRA member Skip Youngberg, K1NKR, who recently spoke at our 100th anniversary dinner!

“What other radio club has three members contributing to the definitive publication on Amateur Radio?

“But wait, make that four members, for let us not forget our Secretary Domenic Mallozzi, N1DM, who contributed to both the 1986 and 1999 Handbooks!

“Congratulations to Frank, Rick, Skip, and Dom! You make us Proud.”

Well, Dom, N1DM (who will be speaking at the Nashoba Valley Amateur Radio Club’s (NVARC) January meeting) is a member of Marlborough’s Algonquin Amateur Radio Club (AARC).  So that makes two AARC members in the 100th Handbook.

And as far as NVARC is concerned, Phil Erickson, W1PJE, is listed on the title page as a contributor and an article by Joe Dzekevich, K1YOW, is in the Handbook’s supplemental files.  That’s three for NVARC.

Also on the local front, Doug Grant, K1DG, has a title page listing and copious acknowledgements throughout the book.  Club members remember Doug from WRTC2014 and probably a few talks at meetings over the years.  Plus, Jim Idelson, K1IR, and Bob Clarke, N1RC, (whose affiliations are unknown to me) have Handbook title page listings.

Last Spring, Fred Kemmerer, AB1OC, asked me about the status of my QST and Handbook collection.  The League was putting together the 100th edition of the ARRL Handbook for Radio Communications and was looking to contact a collector.  Fred subsequently put me in contact through League Headquarters with Mark Derks (unlicensed then, now KC1RVQ), a member of the publications staff.  Mark and I exchanged phone calls in mid-April, then he and a photographer came over from Newington and visited my shack to conduct an interview.  The result in the hardcover version of the Handbook was a sixteen-page color section of radio history which included two pages devoted to the interview.

The whole exercise was quite enjoyable, with the only difficulty being that I was under a nondisclosure agreement until the Handbook came out.  I had a hard time keeping the secret between April and October!

The K1NKR collection contains every issue of the League’s monthly “QST” magazine back to 1915 (all library-style hardbound) and all but one year of the Handbook.

As you know, the Handbook is a massive, almost 1300-page encyclopedia of electronics and communications technology that weighs in at 6.2 pounds—a pretty good pennies-per-page investment even if you only spring for a Handbook “every hundred years or so.”  And if you do, go for the hardcopy version.

Congressman Bill Johnson (OH-6) introduced a bill in the U.S. House of Representatives (H.R.9670) on Thursday, December 22, 2022, to eliminate private land use restrictions that prohibit, restrict, or impair the ability of an Amateur Radio Operator from operating and installing amateur station antennas on property subject to the control of the Amateur Radio Operator.

Congress in 1996 directed the Federal Communications Commission (FCC) to promulgate regulations (Public Law 104-104, title II, section 207, 110 Stat. 114; 47 U.S.C. 303 note) that have preempted all private land use restrictions applicable to exterior communications facilities that impair the ability of citizens to receive television broadcast signals, direct broadcast satellite services, or multichannel multipoint distribution services, or to transmit and receive wireless internet services. ARRL attempts to obtain similar relief for Amateur Radio were rejected by the FCC with a statement such relief would have to come from Congress.

ARRL Legislative Advocacy Committee Chairman John Robert Stratton, N5AUS, noted that Congress, in 1994 by Joint Resolution, S.J.Res.90/H.J.Res.199, declared that regulations at all levels of government should facilitate and encourage the effective operation of Amateur Radio from residences as a public benefit. He continued by stating that “H.R.9670, the Amateur Radio Emergency Preparedness Act, is intended to fulfill that mandate and preserve the ability of Amateur Radio Operators to continue to serve as a key component of American critical communications infrastructure.”

ARRL President Rick Roderick, K5UR, and Mr. Stratton both extended on behalf of the ARRL, its Members, and the Amateur Radio community their thanks and appreciation for the leadership of Rep. Johnson in his tireless efforts to support and protect the rights of all Amateur Radio Operators.

The full text of the bill in PDF format is available online at, https://www.arrl.org/files/file/HR9670/HR9670-Amateur-Radio-Emergency-Preparedness-Act.pdf

This morning the 190’ free standing red and white tower owned by ATC located on Plausawa Hill over looking Concord NH collapsed. The tower itself was ripped right out of the ground. Foundation and all. This tower had AT&T cellular and First Net on it. It appears when it collapsed it missed the public safety, National Weather and some Ham Radio towers.  It pulled on a 900 MHZ feed line and ripped a cabinet right across the room. I would love to know what the wind speeds were at the time of collapse.
—
http://www.nedecn.org/
—