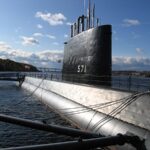 I recently toured the MARS/K1SSN shack on the Subbase [in Groton, CT] with the MARS Team (Ted, K1YON and Bob, N2XN).  Trustee Rich Courtney, N9HL, and Dick, KF6UF, were also on site.  While the shack is serviced by a very robust antenna farm it has sparse gear.  There is a Kenwood TS-440S HF transceiver.  There is also an external power supply and a MFJ tuner.  The shack needs gear.  Some solid-state gear, even vintage solid-state gear, would be nice.  Also needed is a computer with a logging program.

The MARS team and the Trustee are trying to involve and work with the Base to rebuild the station.  But reconstitution of the Base shack and eventually a Base Ham Club will require help.  They have reached out to the Base command structure and hope to involve the MWR office and Emergency Command Center as allies in moving things along.  Right now, the goal is to establish a solid presence and a viable operating station for Hams stationed on or near the Base.

The purpose of this post is to update you on this project and seek individual and organizational support, be it in word or deed, to support the effort.  I.E.  Many times, individually or organizationally we come into gear via Ham estates or through upgrade of personal or club shacks.  When this happens consider offering any excess gear and equipment to the K1SSN shack.  Help from local Hams and Clubs can go far to get K1SSN up and running again.  Plus, local organizational support and involvement can result in new members for one or more of the local Clubs.  Let us all be Elmers and help when and where we can.  The Trustee Rich can be reached at rcourtney@mars-mil.us.  MARS lead Ted can be reached at k1yon@juno.com.