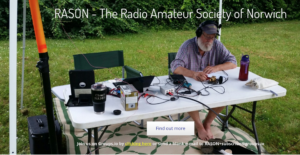 Chuck Newman, NA1CN, reported that the Radio Amateur Society of Norwich (RASON) club repeater input was receiving a signal locking up 146.730 on the evening of June 21.  Dave Thackston, K1DCT, identified the signal near his neighborhood on  Route 2, between Norwich and Foxwoods.  NA1CN called for an impromptu fox hunt on the input frequency of 146.130. The fox hunters coordinated their hunt on the 147.060 Salem repeater.

RASON maintains an well-organized and attractive website at: <https://rason.org/>.