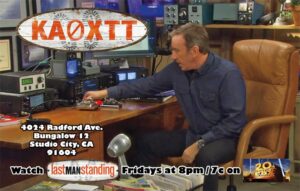 I reached out a few weeks ago, got lots of excitement, but few signups, so I’m nagging again.

As many of you know, the hit Tim Allen sitcom Last Man Standing has an actual ham radio station on the set and ham radio is highlighted on the show periodically as one of Mike Baxter’s (Tim Allen’s) character, with the fictitious callsign KA0XTT. Before COVID-19, each week before the show taped operators would activate the station on the set and many people lined up to work KA6LMS, the club callsign of the on-set station.

After nine great seasons, the show is in the midst of its last season of production. In order to celebrate the end of the show and the exposure it has provided amateur radio, a week-long special event has been planed. From 3/24 – 3/30, the KA6LMS special event will be on the air. If the pileups from the studio were any indication (I had the chance to operate there!), it’ll be quite fun. Though this week surrounds CQ WPX SSB, there is still plenty of time to get on the air.

Similar to the W1AW/p operations in 2014, during the week KA6LMS/xx will be on from all ten callsign areas as well as a few W6x special event 1x1s. *I have been asked to form a team to operate as KA6LMS/1.* Thus, I am asking for you to join me, and sign up to operate as much, or as little as you’d like during the event using the KA6LMS/1 callsign.

We can have as many operators on different band/modes as we want at once, as long as there is only one station per band/mode. I am recruiting operators to operate as few or as many hours as you like, on any band, DC to daylight.

*To sign up, use the Google Sheets link here. <https://docs.google.com/spreadsheets/d/1Cnp2KVdHHIy1q13GuDhlvj8A5GWzHEOEgVDrLT1zRDU/edit?usp=sharing>
*