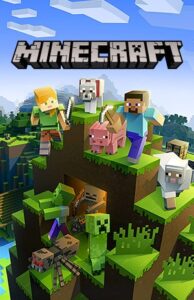 A New England amateur is developing a project to promote youth outreach for Amateur Radio. It’s known as “Ham Radio Minecraft Mod.”
“Raising awareness of ham radio is the primary objective of the mod,” writes Lucas Elliott, W1BTR, of Leominster, MA. “I have met very few people, especially my age, who know [ham radio] even exists.”
Minecraft is a world-building video game and the most popular game of its type in the world, with “total sales [of] over 238 million,” almost double the number of the closest runner up. It contains over 100,000 specialized mods from the user community witten in Java.  The mod would incorporate ham radio into this virtual world along with its many other activities and endeavors.
Lucas is considering applying for ARDC funding for the innovative project.
ARRL New England Vice Director Phil Temples, K9HI, shared information about the project to other ARRL Board members.  Pacific Division Director Kristen McIntyre, K6WX, remarked, “This is great!  I’ve been advocating gamification for several years now.  I’m convinced this will be part of ham radio’s future.  We ignore it at our peril […].”

To read how Amateur Radio could benefit by being a part of the Minecraft universe, read Lucas’ extensive documentation  at <https://docs.google.com/document/d/1F7aA9u93w0lwe9m_QlNSaJeMM02nnYE_6Y5u4fZ9vU4/>.