The Newport County (RI) Radio Club mentors new hams where they are to help them bridge that critical gap between getting licensed and joining a first net. (Sometimes, it even requires a boat!) On Friday, the NCRC and RI ham community gathered together to help new hams on Prudence Island get comfortable on the air. Over the weekend, this inspiring effort helped this Ocean State club’s 2m nets grow with enthusiasm to record levels – and the women are now set to operate with confidence. Amateur radio is a welcoming Social Media, a Technical hobby, and a key form of resilient communication.

Prudence Island, Rhode Island is a strategically-located island in Narragansett Bay not accessible by any bridge. It’s the kind of place where, for example, today a sailboat is racing the ferry that runs periodically to Bristol, RI. It has a small-year round community and earlier this year two growth-mindset long-time residents, Patricia Strong, KC1RJD, and Nolan Byrne, KC1RJK, decided to study with the NCRC on-line education training given by Bob Beatty WB4SON – and plunge ahead to take their Technician exam. Their mission was to get on the air and bring resilient communication to their island. And yes, they could do it! With no technical background, but plenty of can-do attitude, these two older women took the ferry to the mainland and passed their exams on June 4th with flying colors. (See pre-exam photo.) The club provides new members with radios and the women took part in Field Day this June. So far, so good.

But then, like many new operators, they ran into speed bump issues around antennas, net etiquette, and basic comfort around using an HT on a daily basis. What to do? As the summer wrapped up, NCRC-VP Paul Fredette, K1YBE, reached out to fellow antenna and mesh mentors in the club, as well as club member Ray Perry, KC1IPC, at the Portsmouth Emergency Operation Center. How could we collaborate to help Pat, KC1RFD, and Nolan, KC1RJK, get the mentoring they need to really get on the air? Prudence Island is technically a part of Portsmouth, and so arrangements were made for a team to visit these new hams at their respective island QTHs and install appropriate antennas, test mesh equipment, and then help Pat and Nolan get comfortable contacting club members across the water.

Everything was a huge success! The new hams had a mentor at their side as they practiced making contact with stations using the NCRC’s W1SYE Repeater. Since hurricane season is upon here, a test was also made on Simplex. The women were able to easily contact other nearby club women across the Bay, as well as getting strong signal reports across the entire state: from Carl, KC1NAM, in Tiverton, to Dan, KB1RON, in West Greenwich, to Steve, WA1GVM, in Coventry, to Ted, KC1NEU, near Providence. This mentoring session was a game changer. The new hams have rejoiced at the support they received from so many, and felt empowered to join the NCRC nets that night and over the weekend. Mostly, they appreciate the welcoming, nonjudgemental community support that met them where they were—figuratively and literally. As they say, it takes a Village! 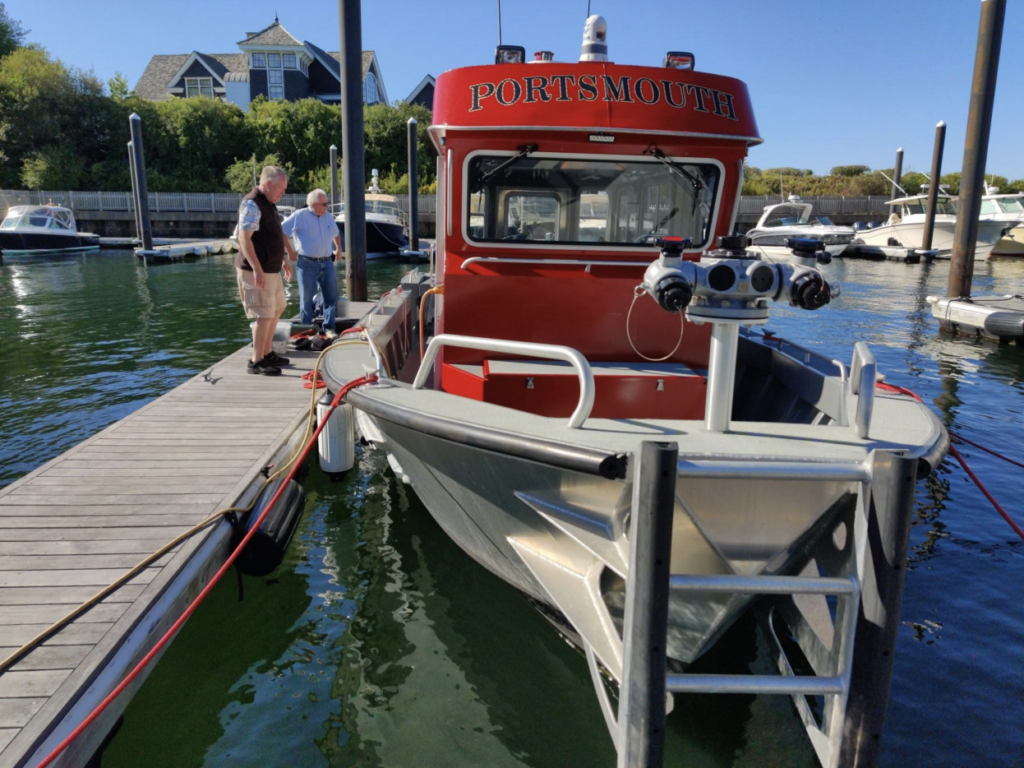 On Friday September 2, 2022 a team from the Newport County (RI) radio Club (with support from Ray Perry,KC1IPC, at the Portsmouth, RI Emergency Operation Center) took the boat to Prudence Island to install antennas at various QTH, test future mesh capabilities, and mentor new hams Nolan, KC1RJK, and Pa,t KC1RJD, on how to join a 2m net, call CQ, and move between the W1SYE repeater and the National Calling frequency on Simplex as needed. [Trip photos courtesy of Keith Henry, KC1LPV]