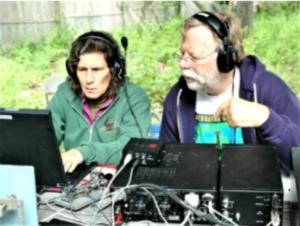 The Kennebunk (ME) Press Herald carried a story on June 9 entitled, “Bopping Through the Wild Blue, Amateur Radio Field Day Makes a Connection.”
—

KENNEBUNK – Interest in amateur, often called “ham” radio began at the turn of the 20th century. It was a way people could talk to each other, across town or across the world.

And although cell phones and other means of communication are very much in use, ham radio remains a popular pastime and a valuable resource.

“It can provide communications when all other systems fail – that has been proven many times during events such as hurricanes, earthquakes, fires, etc.,” said Alex Mendelsohn of the New England Radio Discussion Society. The society will host its annual field day later this month. [Full story]