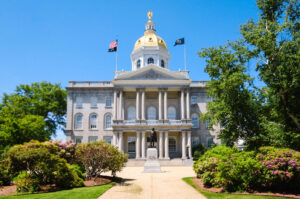 New Hampshire House Bill 313, “Relative to property restrictions on certain amateur radio antennas,” failed to reconsider by voice vote on April 7, 2021, according to FastDemocracy.com.
The bill was originally heard before the House Commerce Committee on January 26, 2021. Over 100 amateurs went on record to support the bill.

• Antennas similar or identical to those for satellite TV dishes, broadcast TV, or broadband internet
• single wire or minimally visible antennas
• antennas raised only in darkness
• antennas no higher than 33 feet (i.e., lower than the roof line), and
• the use of a flag pole as an antenna

on land where the homeowner already had the right to exclude others, and would have required safe construction, with municipal approval.

“Another shot is possible in 2022, but it will need to be a much more modest bill to have any chance at passage,” writes former N.H. House Representative Bill Ohm, W1OHM.  “My recommendation is to just permit dual use of an existing structure, like a flagpole. Down the road, in subsequent years, incremental progress can be attempted to permit other structures.”
See also: