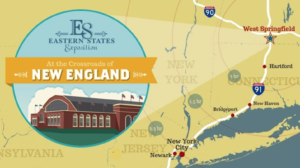 Hampden County Radio Association president Larry Krainson, W1AST, is coordinating an effort to organize an amateur radio booth at “The Big E” in West Springfield, Massachusetts for 2022. The exhibition runs for 17 days from September 17 through October 3, 2022.

According to Wikipedia, “The Big E,” formally known as The Eastern States Exposition, is billed as ‘New England’s Great State fair.’ It is the largest agricultural event on the eastern seaboard and the sixth-largest fair in the nation.”

W1AST says the 2016 event had 1.4 million visitors, and over 1.6 million visitors in 2019. “If just one-tenth of one percent of attendees sign up for ham classes, that would be 1,600 names to distribute to all New England clubs. We would all benefit and grow ham radio.”

There hasn’t been a ham radio exhibit/booth at The Big E in over ten years.

Larry envisions a ham radio booth that would demonstrate the many aspects of ham radio, as well as an avenue for people to sign up for information and courses in their local area.

Some of his ideas include:

W1AST says he’d like to see clubs from different states staff the booth during “State” days and theme days.

“If there is enough interest, we have lots of time to plan.”

Such an undertaking can succeed only if there is a sufficient number of volunteers and radio clubs who agree to participate in the event.  A special Groups.io mailing list group has been established to promote exchange of dialogue and ideas for the event. To join, send an email to ProjectBigE+subscribe@groups.io.